Rabbi Kramer, the driving force responsible for the growth of Lubavitch in Montreal

As I’ve seen Montreal grow and develop within the Jewish community, one of the most amazing developments was of course the Lubavitch community itself. When I first came, Lubavitch was on Park Ave, it was not a very large Yeshivah at that time. If you were to see the development and growth of both the neighbourhood, on Westbury, and the Yeshivas and all the branches, and you would remember what it once was like on Park Ave, you would never believe the development and growth and even the community which is a very large Lubavitch community today.

But as Akavia Ben Mehalalel said, “Dah maiayin basa”-  Know from whence you came.  What was the origin, where did the growth come from? Where did the development come from?   There is one individual that I can say and attest to the fact that I saw through the years that he almost singlehandedly developed the growth of Lubavitch in Montreal – Rabbi Leib Kramer, ע”ה.  From the very beginning, in terms of what he was able to do, of being able to move from Park Ave, to the first building on Westbury, it was all a question of his koach, of his strength, of his ability, of his knowing people, knowing baalei batim, knowing yiddishkeit, and knowing what Lubavitch should mean to the community.  The man who was the builder for the Yeshivah never in his life dreamed that one day he would be building a Yeshivah. It was only the influence of Rabbi Kramer that Mr Cohen, of the Cohen family in Montreal, a well known real estate-nik, built the Yeshivah on Westbury. All that work was almost the single handed work of Rabbi Kramer. All of the Roshei Hayeshivah, Rebbeim and teachers that worked in the Yeshivah over the years, owed him a tremendous amount of hakoras hatov – gratitude. Perhaps they didn’t always realize it, but their livelihood, their whole basis of existence, was through the strength, the koach, and the work of Rabbi Leib Kramer. He was the influence of ruchnius, of gashmius, and had the incredible ability of seeing that Lubavitch should grow to be what it was. 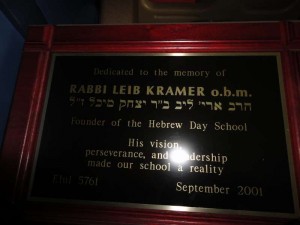 As time went on, we’ve seen the growth even at our own synagogue in Beth Zion, where Reb Shmuel, the son, and the daughter-in-law Sarah built up a pre nursery, using some of the classrooms in Beth Zion for different classes and what-have-you. It started as a very small group, and today they are occupying one full part of the building, plus they’ve purchased a house next door, renovated, and it is filled to capacity! Whenever there is registration, you have to stand in line to register and people are calling in all different directions to be able to get their kids into the pre nursery. This again was the koach of the late Reb Leib Kramer. I dealt with him on many issues, issues in term of the school versus the Shul versus the classes and versus the facilities, but the amount of wisdom that he used in being able to see that there’d be a continuous growth, this was min Hashamayim – Divinely instigated. This was really something that was worth understanding and appreciating. Whenever Lubavitch would have a dinner, of course the dinners were one of the main means of the upkeep of Lubavitch, it was Rabbi Kramer who was behind every detail. He would choose the baal habayis – supporter – that was to be honoured, choose the individual that would be the chairman, choose the individuals that would spearhead it, etc. He was in every facet of the development of Lubavitch, the key figure in its growth and in its development. When you drive through the area of Westbury and you see how many people are living on Westbury, on Plamondon, on Kent, all in that area because of the presence of a Lubavitch community, and you see Beis Rivka, Chaya Mushka Seminary, all the different schools even the girls school and the development of the latest schools that are being built, the most important thing is remembering the mishna of Akavia ben Mehalalel: dah maiayin baasa, know from whence you came. Your source, your strength, your development, your growth, Rabbi Kramer put in the seed, brought the earth, brought whatever was necessary to have it grow, and as it grew and developed and people come and see the spread of Lubavitch in all of Montreal, they should know, the makor – source – was Reb Leib Kramer.

My friendship with Rabbi Kramer, which extended to his family as well.

I first met Rabbi Kramer in the early sixties, at the dedication of the Yeshivah building.  You see, the builder of the yeshivah, Mr Cohen, was in fact related to my brother; My brother married a Cohen, and this builder was his wife’s uncle. And so when the building was dedicated, that was my first experience with Rabbi Kramer. From that time on, we continued to meet at different occasions. When there were dinners and other functions that took place at Beth Zion, I got to know Rabbi Kramer even better.  I was guest speaker at some of the dinners, and so on, and we created a very warm relationship. It was a relationship not only with Rabbi Kramer himself, but with the entire family, with the Rebbitzin, with the daughters. The daughters taught in the school. Esther was one of the teachers, the son-in-law was one of the teachers, and it wasn’t a pre-nursery only, it was a school at one time and this developed and grew to a wonderful capacity. We were dealing almost on an everyday basis. And if the school couldn’t pay the rent and the shul would come with complaints and what have you, I tried to mend the fences, and Baruch Hashem, it worked.

Rabbi and Rebbitzin Kramer attended all our family simchas, and invited us to theirs. I would also get invited to their home for seudos, meals. It was amazing to spend time at the Kramer house and to see the way the children, the grandchildren, and the way the rebbitzin was so involved in doing so much and as the kids grew, the daughters were involved, everybody was involved.

Even these days there isn’t a Shabbos where Rebbitzin Kramer doesn’t have grandchildren staying over with her, whether from New York or Israel or wherever, she’s never stopped hostinf and entertaining, she’s always busy.

As much as Rabbi Kramer was involved in community, he never neglected the family. In other words, “Veyikchu ish seh l’ beis avos” one of the first mitzvos in the torah of preparing for the korban pesach, you see the importance of the beis avos, the family, Reb Kramer kept the kedusha of the family. Whether it was shabbos whether it was Yom Tov whether it was Purim whatever the occasion was, family was there.

Our relationship on a more personal level

Rabbi Kramer and I had many encounters, many ‘asifos’, meetings and what-have-you. One thing I can tell you is this- I would rely on his judgement.  I had a charity fund and I controlled the charity fund, and once a year Rabbi Kramer would come to me with different projects of Lubavitch. He would give me one formula of what to do with each and tell me why this was his formula, and I would very often rely on what he would say, of what was important and what was more important. Why? Because I knew he was the judge. He was the one who really knew which areas were more important than others.  And I gave exactly in terms of the proportion that he would speak of.  Of course he never told me how much but my proportion was always in proportion to how he evaluated each of those institutions.

Let me share a personal story with you. I had to undergo serious surgery in 1989. I remember the night before the surgery, it must have been about 10:00, and suddenly the door opens, and very quietly someone walks in. I’m able to recognize that it’s Rabbi Kramer. He says, “I know you’re having surgery tomorrow morning.  Don’t worry- I’ve been saying Tehillim.  And I want you to know, that I have a strong feeling that the manner in which I said Tehillim you will have a refuah , just like the Gemara says when someone was mispalel for someone else it was through his tefillah that he felt whether there would be hatzlacha or not.” And Baruch Hashem he gave me the courage that night to at least fall asleep, because until that point I didn’t think I would. It was a very serious surgery. By coming to me at 10:00 at night, he gave me that koiach. He was able to pinpoint situations and he was able to understand each situation in its proportion of what its reality was and react to it. His sensors of feeling a situation and how to deal with it were very strong.  He had a tremendous koach of being the individual who could help, who could lead and to fully comprehend a situation as it really was.

It is well known that Rabbi Kramer would use his connections to help people. If someone came to him with an issue, say he needed a doctor or a lawyer, Rabbi Kramer would call the doctor or lawyer that he knew, and ask them to help this person. He was able to take individuals, either with a medical problem and try to get them the right doctor, a financial problem and perhaps get them if they needed the right lawyer, he knew people in many areas. And when he would walk in to someone’s office, it was a kovod for the individual that he came in, even though they may have known that he was there to collect money for the yeshivah! They would receive him, not in a sense of “Oh my G-d, here comes someone that’s gonna take some of my money”, but on the contrary, “I have the pleasure of having Rabbi Kramer coming to my office!”

One small incident I remember of his quick wit. Once Rabbi Kramer got up to speak at one of the dinners, and the microphone wasn’t exactly working well, and they were telling him that he has to get a little closer to the mike and he said: yetzt farshtei ich, men darf redden tzu di zach – now I understand one must speak to the point. Which is a play on words because zach also translates as ‘thing’ referring to the mike.

To sum up the personality and legacy of Rabbi Kramer

There are very few people who possess attributes in very different directions. Rabbi Kramer was an individual who was molai torah, molai chochma, molai simcha, molai aveilus when it was a time of aveilus.  He was a total person in so many different aspects of life. It is very hard to find an individual who has so many attributes in so many directions and at the same time being able to accomplish so much with community, but above all with his family. He was an extremely clever individual, who was a true ben torah in every sense of the word, knew torah, knew people, and knew what developing a yeshiva meant. He had all these capacities in one.

If I had to choose one lesson to take from Rabbi Kramer to teach to my children and grandchildren, it would it be: perseverance. Rabbi Kramer had a very strong midda of perseverance, of continuously working on something until he saw it through and then going right after that to the next project.